Fandom Art, But Sometimes Not

Commissions are open! Hello! My name is Ace (they/them, 22, asexual, college student), welcome to my blog! I like to draw things, so let's find out what I'll fall in love with and draw next!

@gloatbee posted about magicvoxel a while ago and I wanted to try it out so I made some minimalist Harry Potter books for my first attempt at 3d art :3

OOOOOHHHHH, I hope you liked it!! It's so easy to use and the last upgrades have made it really worth it

Also, this is a good start!

#Art #My first time using it was #a year and a half ago #and it was kinda weird to navigate #if you have any question I gladly help!!! #I'm not expert #but at least I know what half of the things do

The Home at sunset

So, ever since I read this, I knew I had to do something for it. I didn't google what a sunroom was until I finished drawing so this probably is not what @thehome had in mind, and of course, is lacking a whole lot of flower pots since I'm not good at interior desing, but I'll be damned if I say I didn't try my best, so here ya go!

#Oh my God this is pretty #Art

based on the Gold/Crystal sprites~

#Art #this design is not only cool #but also really pretty

A bachelorette from Ad Mire!

One delicate hand lifted to dab at Sairynia’s forehead in the hopes of doing away with the sweat that was beading her brow as she worked on her latest painting. She’d spent the better part of her morning mixing her new paints once her pigments had finally been delivered after a couple of lengthy delays and with the apologies of the shop. It seems they had run out of the highly sought after pigment just after she’d made her order and had to wait for more of the mother of pearl to arrive.

A knock on her door, drew her gaze from her current piece as she called out,” Yes?”

“Are you decent?” She recognized the voice as belonging to Sir Naad. With a small flare of her nostrils, she resisted the urge to say no even as she spoke the truth,” I am, Sir Naad. You may enter.”

Setting her easel aside and gently tipping her brush into the cleansing cup, she rose from her stool with the slightest of wavers and bowed her head in respect to his station as a knight upon his entry receiving a bow in return. “ You are looking radiant, Miss Nassar.”

“You are kind to say so.” She felt anything but radiant, currently. She made a mental note to go down to the kitchen and request some menstrual tea later as she’d begun her cycle in the middle of the night and attributed her feeling poorly to that. It was, sometimes, the case. “What can I do for you, Sir Naad?”

“You missed training this morning, I merely wished to check up on you and make certain you are well.”

She sighed wearily and lifted a hand in a near helpless gesture,” I am quite well, other than the affliction all women suffer on a monthly basis.”

“Man problems?” He quipped in an attempt to make her laugh and, for once, it worked. Her laughter filled the room and brought a smile of satisfaction to his lips as she replied with her usual sharp wit,” Men are the least of my issues given my status.”

Her ambiguous response drew a chuckle from him. “ Touchè. As for missing your training, under normal circumstances, I would feel a need to discipline you but I believe I will let it slide.”

Her brow raised at his playful candor before she cooed,” I suppose it is a grand thing that circumstances are not normal nor am I your squire, but I thank you, nonetheless.” She watched as he moved further into her room and began to take in the view of her most recent paintings. As he paused before each to study them, she felt her breathing stall, fearing poor criticism as any artist would.

“You really do have an exquisite hand. You should consider selling your work.”

“So I have been told. I am still undecided on the matter,” drawing in a long breath and expelling it slowly, she plants a hand on her stool and leans on it as she feels a small sense of unbalance coupled with the dull ache of cramps. The sight of it caused Taal to regard her more closely as he inquired more assertively,” Are you certain that you are alright?”

She waved him off and nodded,” I am fine. It is rare that it happens but, on occasion, I do suffer dizziness and nausea during my menses. With that said, Sir Naad, unless there was another matter you wished to address, I believe I need to go lay down for a bit.”

“ Only one and I will be out of your hair. Do you believe you will attend training tomorrow or will you require another day?”

“I will manage, Sir Naad. My apologies for not sending proper word this morning. That was ill-mannered of me. You’ve my permission to work me twice as hard tomorrow.”

“Permission, do I? You may regret those words.”

“I look forward to it. Now, the second matter?”

“Is there anything I can get for you to help with your… condition?”

She smiled at him. He really did make it difficult to continue to revile him for his earlier actions taken against her.out of misplaced loyalty and lack of the truth. With a small laugh, she finally nodded,” Indeed. Would you please inform C’zir that I require my menstrual tray? He will know what to do from there. Thank you, Sir Naad.”

“You are very welcome Miss Nassar.”

Stepping back, he bowed to her once again and turned to take his leave. Once he was gone, Sairynia planted her other hand against the stool to steady herself with a blustering of her cheeks as she fought the swimming sensation in her head. This cycle was, truly, going test her limits as a woman. As another wave of dysequilibrium took hold, she leaned on her palms heavily and waited for it to pass before pushing upward and slowly moving toward her bed where she crawled onto it to lay down in the hopes of easing the distress on her body while she waited for C’zir.

Try as she might to get her head to stop swimming, Sairynia found no relief. She tried rolling to her back and rubbing her temples. She covered her eyes with the crook of one arm. There was even an attempt to quell it all by laying with her feet and legs propped up against her headboard. When none of that worked, she merely rolled to her stomach and threw a pillow over her head and shut out the world around her.

By the time C’zir Al’Malik showed up with her request, he found the woman curled up into a ball in the center of her bed pressing that same pillow down on her head. “Sairyn? Are you unwell?” Her soft whimper was his only reply as the man who had been her best friend since childhood. Setting the tray filled with goodies aside, he swiftly crawled onto the bed with her and pulled the whimpering woman across his lap to stroke her back as he murmured into her hair,” How bad?”

“It feels as if my head will split, C’zir. I can’t think. I can’t open my eyes without feeling as if they may pop out.”

Kissing the top of her head, he gently set her aside and moved for the tray to collect some water and spooned a bit of the powder he’d brought with him into it and stirred it in. Turning, he brings it over to her and gently pats her thigh,” Come, sit up and drink this.”

“No. It makes me dizzy to be upright.”

“Suffer for a moment to help yourself gain relief. It is dong quai, willow, and valerian.”

Groaning dramatically, she slowly sat up and took the offering to gulp down with a small face at the bitterness of the taste before draining the cup and returning to her curled position on the bed. After setting the cup aside, he sighs and reaches down to scoop her up into a cradle carry and sets her back down on the bed properly before covering her with the top cover.

“Rest. If the headache doesn’t ease, make some more in an hour and drink. I brought your menstrual treats and tea and some valerian tea just in case you needed it and it is looking like you do.”

“Stay? I could use the comfort of your presence.”

He laughed softly as he leaned over her and looked down at the side of her tight face,” You mean you want me to massage your neck and back.”

“Very well. I will stay until you fall asleep, agreed?”

Crawling into the bed, he gathered her up into his arms and slowly drew his palm up the length of her spine and applied his fingers to her neck before slipping it back down again in a leisurely massage that always offered her comfort during this, the most miserable times of her existence.

“I’m fine. It is probably just due to the pain.”

He was skeptical but decided the fever wasn’t enough to worry as it wasn’t terribly high. Tucking her head beneath his chin, he went back to his massage of her back and neck. If she wasn’t better by tomorrow, he’d inform her mother.

Go Your Own Way

"I've seen this one before! Can't say it ends well."

Art of my friend's OC Beth, I'm proud of this one oog.

She's called a firecracker for a reason!

smack a bitch with a giant plush shark 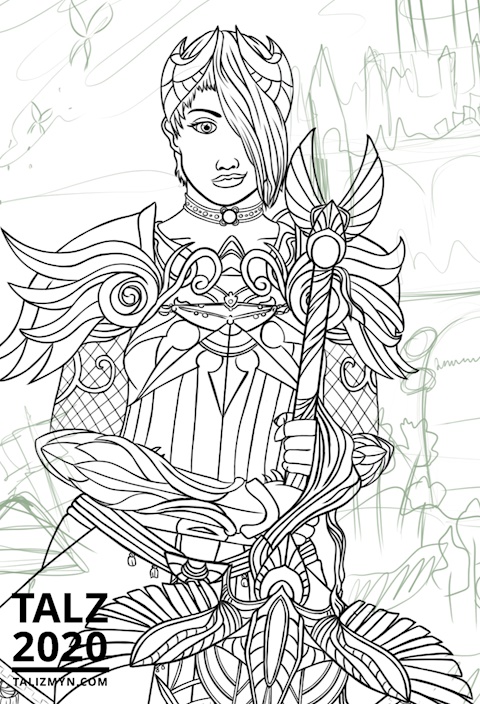 Those who create art and use kofi or Patreon, which do you prefer and why? I don't need to know what's "better" since it's subjective but getting an idea of what works for people using either platform would be helpful.

I want to use one of them... I know I don't have a lot of followers yet: under 100 between Instagram, Wordpress, Twitter and other social medias.

I'm more familiar with using Patreon in the subscriber side, but Ko-fi's options appeal as a creator.

I guess the next question is: what do fans prefer, too? Which perform do you prefer your favourite creators use?